I’m writing a zine about suicide, borderline personality disorder, & friendship, but I’m struggling because, gosh, I’ve been writing about these things for such a long time & it feels almost impossible to offer any new insights or hope. I’m also trying write about the ableism & transphobia I experienced on the inpatient psych ward at CAMH (Centre for Addiction & Mental Health in Toronto, Ontario) in May, but I am so sick of writing about gender & ableism & madphobia! I’m so sick of feeling trapped with it all.

Anyway. I’m sharing an excerpt below. Maybe you’ll relate, maybe it’ll explain some of my weirdnesses, I don’t know.

“Lately, I’ve been examining the possibility that it’s my borderline tendencies destroying my friendships, making me feel disconnected, harmed, and scorned. The DSM-5 notes: ‘conflicted close relationships marked by mistrust, neediness, and anxious preoccupation with real or imagined abandonment; extremes of idealization and devaluation and alternating between over involvement and withdrawal.’

Each time I reread those words, I feel like Arthur in Velvet Goldmine jumping up and down, pointing at the TV, shouting, “That’s me! That’s me!”

While I still believe that many of the hurts and traumas I’ve experienced through friendships and communities over the years are very real and very painful, and have had serious negative consequences on my life and my psyche today, I also know that some of what’s going on is my crazy brain and its inability to understand humans, friends, as complicated, complex, contradictory, and magical beings – despite so often declaring myself as such.

This kind of simplistic, all-or-nothing black-and-white good-or bad (binaries!) thinking is a destructive force in my daily life, and it limits how close I can get with my friends, new or old; it limits my possibilities of loving and feeling loved, caring and feeling cared for, and of simply feeling good in each moment.” 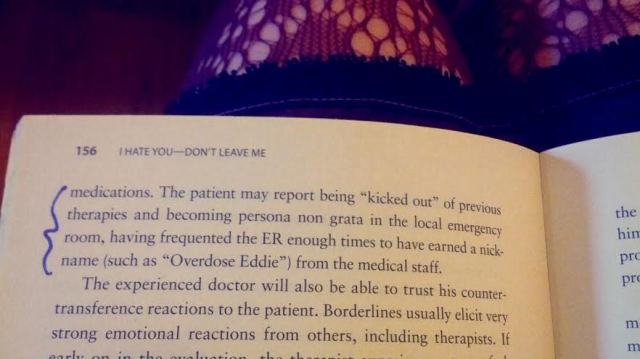 A page from I Hate You Don’t Leave Me: Understanding the Borderline Personality by Jerold J. Kreisman MD and Hal Straus

“The system is shit,” the last doctor I spoke to at CAMH told me. I’m glad I kept a diary; reading my messy handwriting, I’m reminded of how much I’ve forgotten so quickly, the daily minutiae of psych ward life, the tiny bits of magic I tried to find nonetheless.

I’ve been admitted to hospitals four times in the last month and a half (twice I went to the ER & was sent home, once I was brought unconscious by ambulance to the ER, and then I was transferred to the psych ward for about a week). In April, I went to the CAMH ER. When the intake nurse started filling out my forms without asking me questions, I interrupted to tell her not to check the ‘female’ box, but to scribble in ‘non-binary, “they” pronouns’ blah blah boring shit I’m sick of talking about.

She cheerfully said, “Non-binary! I’ve never heard that term before! What does it mean?”

“It means I’m not a girl and not a boy,” I mumbled. “With so many gender options on your forms, working in this kind of environment, this term really shouldn’t be new to you.”

I took a deep breath.

“I know. But you’re the one getting paid for this, and I’m the one in a suicidal crisis. Your education is coming at the expense of my mental health and your lack of knowledge directly harms queers and trans* folks coming to the ER. I don’t have it in me to teach you right now.”

When I came back to the ER a month later, I pretended to be a girl because I didn’t want a repeat performance of the nurse who thought I’d be an excellent learning experience – but “Non-Binary” was already on my file now, and they confronted me when they brought me into a private room, so I explained myself, but it seemed pointless.

The psychiatrist at CAMH told me she might be able to send me down to the women’s unit, and refer me to women’s only group therapy sessions. I told her that I’m not a woman and wouldn’t be comfortable there; I reminded her that I’d already tried to explain that pretending to be a gender I am not is partly what’s killing me. But she told me the women’s unit would be the best place for me (thankfully, she didn’t actually send me there after all). She told me, “As long as you make it clear to everyone there that you’re female-assigned-at-birth and don’t have a penis, your presence shouldn’t trigger anybody.” I was too exhausted to tell her that it’s this kind of gender essentialism that makes me wanna die, this hopelessness of the mental health care system that makes me wanna die, that she was exhibiting such Transphobia 101 that I didn’t know if I should laugh or cry (I did neither, I was numb), and that being in such a space would in fact be triggering for me and damaging to my psyche and my recovery.

Within two hours, I’d changed my mind from wanting to find a safe place to sleep, to wanting to give up entirely. I wrote my suicide note while the psychiatrist filled out my discharge forms. I walked home and overdosed about an hour later. I was brought by ambulance to another emergency room, fell into a coma for twenty hours, and don’t remember much. Later, I found myself on the inpatient psych ward. I actually didn’t know I’d been in a coma until a few days later, because none of the doctors or nurses told me what had happened, and my memory had been erased.

When a nurse came to my room to bring me a bag with a change of clothes and my cane that my sweetheart had dropped off, she tried to confiscate my cane. Apparently, my sweetheart had tried to warn me via text that the nurse looked iffy about my cane, and to prepare for trouble, but my phone was locked up in the nurse’s station so I didn’t get the message.

She told me I couldn’t use my cane because I might use it as a weapon. I tried to remain calm and explain to her why I need to use my cane, and how confused I was that a hospital of all places would confiscate mobility aids, but she wasn’t listening, and I began yelling. Two more nurses came to my room to back her up. They stood too close to me, and I did begin to feel violent. My cane was folded when they gave it to me, and I unfolded it and used it immediately.

I remember them telling me to calm down and stop telling, that I was annoying the other patients who had just gone to bed. This made me feel the need to yell louder. “I DON’T CARE IF I’M KEEPING EVERYBODY AWAKE! I WANT THEM TO KNOW THAT THIS IS HAPPENING! IF SOMETHING SIMILAR HAPPENS TO THEM I WANT THEM TO KNOW THAT THEY AREN’T ALONE.” Eventually, my screaming became indecipherable; I mostly wasn’t screaming words anymore, just hopeless noise. I told the nurses that if I wanted to hurt them, I’d use my hands, not my cane. I became belligerent, noisy, triggered. The nurses left me alone to scream at the walls and the floor. They let me keep my cane. I thrashed my cane all over the room, breaking nothing, of course, just scuffing up the cheap black metal of it, watching it crumple and bloom again each time it hit my desk, my chair, my bed, the walls, the floor. I curled up in a ball on the floor and screamed until I slept.

Nobody mentioned it the next day, but whenever the nurse who tried to confiscate my cane was back on the ward, she’d refuse to make eye contact with me. I took names to file a report. I found out later that the staff are supposed to offer a walker to anyone who needs a mobility aid, because sometimes people do indeed use their canes as weapons (it sure is tempting!), but since I didn’t have my cane with me when I was admitted (because I was unconscious when I was admitted), they thought I was lying about my disability and didn’t really need it.

I spoke to yet another doctor the day I left and asked her how to get ahold of my file. “Of course!” she said. “You’re perpetually curious!”

P.S.: I have a new zine! Telegram #34 is about trauma. It’s not just about PTSD, but also about finding ways to exist in public with these messes and these stories, harm caused by one’s own communities, chronic pain, loss, getting sober and staying sober for three years, madphobia, in/accessibilities, and the im/possibilities of recovery and healing. Magic and Tarot, too, because they keep me going. It’s not gonna be the most fun read. You’ll probably feel uncomfortable. But maybe you’ll know what I’m talking about and maybe we can get through this together-ish.

P.P.S.: If you’ve benefited from my writing in any way – if my words have inspired you, helped you feel less alone, or sparked some weird feeling within you; if you’ve felt encouraged, or curious, or comforted – please consider compensating me by offering a donation of any amount. Whether you’ve been reading my writing for years, or just stumbled into me this afternoon, I invite you to help me sustain the process!