Magical Concoctions for Sober Witches (And a Deadline, Too!)

Posted on November 16, 2019 by marandaelizabeth

It’s been a little while. It’s not ~officially Winter~ yet, but it’s Winter. Snow on the ground, almost-bare branches, reduced mobility for crip-bodies, and fingerless gloves to type. I feel like it should still be Halloween. But my sense of time, date, month, season, has been deeply skewed. Dissociation and detachment, etc. Med changes. You know how that goes.

I write with fun news, though! I was recently invited to participate as a Tarot consultant with Temperance Cocktails – they’re rad folks who make non-alcoholic cocktails, truly magical concoctions. If you’re sober, like me and like so many of us are, you’re probably sick of ginger ale and Coke, of the sugary Shirley Temple when you’re feeling fancy. These days, I’ve got eight and a half years sober. When my body can, I like to go out and dance, and I like to write in dark bars. But there are so few options of yummy things to drink, and I can only hang out for free for so long.

“A year and a half ago, I (Audra Williams, noted online emoter and lifelong non-drinker) fell in love with a bartender (Haritha Gnanaratna, fastidious drink inventor and infrequent drink-drinker). Our first date required me to leave my house and go to a bar, both things I think are pretty overrated. But when someone tells you that they carry cat treats in their backpack in case they see any cats throughout their day, you obviously have to meet that person.

A week later, the bar where Haritha was working closed without warning on his birthday. Three days after that, I asked “Do you think cocktails need alcohol in them?” He looked off into space for a few minutes and replied no. Six weeks later, we launched our non-alcoholic beverage company, Temperance Cocktails.”

They’re currently running a Kickstarter campaign – it’s been successful so far, with multiple rewards added along the way, some of which have sold out. As of tonight, we’ve got five days left to raise the final $11,000. It sounds like a lot, and it is, but we’ve already raised $26,000, and I really believe we can make this happen! This campaign is all-or-nothing. Please check out their page, share with your friends, and consider making a pledge!
Temperance Cocktails are making drink recipes based on the Major Arcana, with illustrations by Cindy Fan, consultations by me, with a whole lot of other excellent people involved. Among the rewards are Tarot readings with me, along with the book of recipes, the deck of cards, and more. 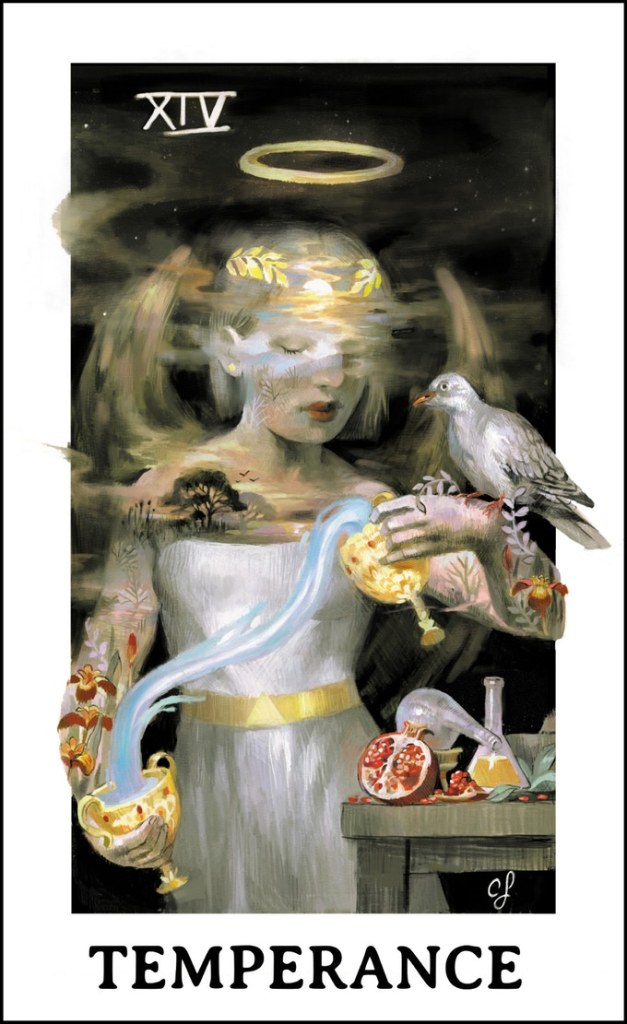 Of note: This is a rare thing for me. I love to collaborate with other artists, writers, and creators when I have the chance, but just as I am a solitary witch, I am also frequently a solitary artist. Not only is this a lovely opportunity for connection and creativity, it’s also – as long as it’s fully funded – a paying gig, and y’all know how rare and cherished those can be, too! It means a lot to me that Audra Williams, a local pal of mine, had my name in mind for this project, and reached out at just the right time. I’ve been re-connecting with the Tarot more frequently these days, writing about the Tarot online again (like in my recent blog entry, Toronto Forget-Me-Not, where I visited addresses in Toronto where my nana received love letters in 1950), and teaching my partner about the Tarot as well. For two years, I wrote See the Cripple Dance, a column where I explored Tarot through a lens of disability, madness, poverty, and anti-capitalism. I’ve been revisiting some of those pieces during this current period of Mercury Retrograde, and it’s still giving me so much to think about. Consider this one: The Six of Swords and Celebrating Sobriety.