The Other Side of Jealousy

Posted on May 9, 2013 by marandaelizabeth

Because I like writing about complicated and sometimes scary emotions, I’m gonna write some more about jealousy. I’ve been reading a lotta good stuff about jealousy lately, including When Good Things Happen to Other People on Rookie and Are Comparisons the Root of All Evil by Nubbly Twiglet. And I recommend, once again, Creativity & Jealousy: Stories & How to Deal, by me. However, this time, I’m not writing about feeling jealous. Instead, I’m gonna try to tell you what it feels like when other people are jealous of me.

I started feeling it the moment I began telling my friends that my zine anthology was being published. The feelings got stronger when the book was released, and stronger again when I told my friends that I had self-published my novel. For a while, nobody told me directly that they were jealous, but some of my friends started acting different.

Recently, a friend of mine told me they felt jealous of me, and after that, a few more friends admitted to the same thing. So we talked about it. While some of them did, in fact, feel resentful that I had published books before them, others realized that they weren’t ready to publish a book yet anyway; but because they wanted to, eventually, they felt like my books taking up space in the world left less room for theirs. That’s simply not true! 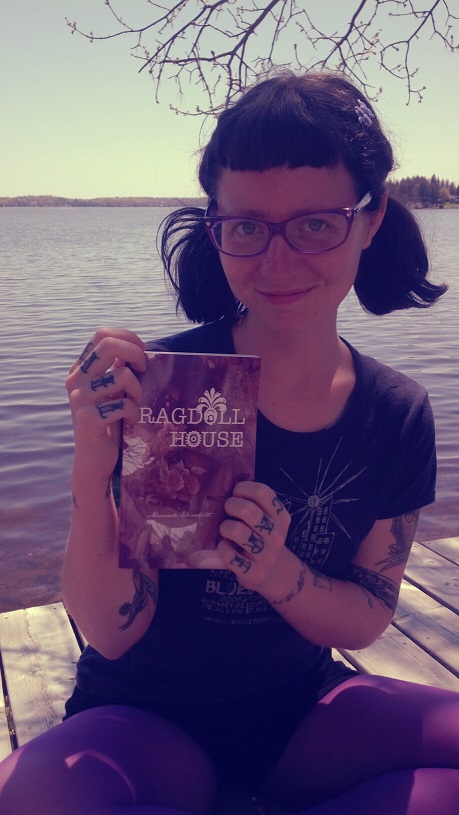 At first, I didn’t know how to name my reaction. But then I figured it out: Defensive. I know that when I feel jealous of someone, it is because some part of me feels like I deserve what they have more than they do. So, that must mean that when somebody feels jealous of me, they must feel like they deserve what I have more than I do. And that makes me want to scream. It makes me want to remind you that I was not always a published writer, I was not always a good writer, I was often too depressed to write, I have written about a hundred unfinished stories for each completed one, I have lost track of how many times I’ve been hospitalized, I still feel violent and unsafe, I am not getting rich with my writing, I am still on disability for mental illness and chronic pain and it is taxpayers and the provincial government paying my bills, not me and not my words, I still choose to injure myself, I don’t think my stories are the most important stories ever ever ever but I do need to tell them to stay alive, I am still suffering with post-traumatic stress disorder and I don’t know how to talk about it except through fiction…

But I don’t want to defend my self. I don’t want my friends to feel jealous or resentful; I want them to feel proud. I want to remind you that I still feel jealous sometimes, too, and I know what it’s like, and holding my books in my hands is the most amazing thing ever but it hasn’t fixed my life, it hasn’t cured my depression, and I sure as hell have not gotten my shit together. I’ve spent the last two months living on my mom’s couch and giving my money to her shitty landlord! My wrists hurt too much to respond to all the lovely and life-saving letters I get in the mail!

Jealousy is inevitable, and even healthy, but it can also be poisonous. Like any emotion, if you do hard work with it, you can figure out what it’s trying to tell you, and then you can find ways to deal with it. You can choose how to interpret your feelings of jealousy, and how to respond to them. My jealousy often told me that I wanted to be visible, I wanted to be productive, I wanted other people to read my words, and I wanted to stay alive. My solutions were to write more, to write better, to talk about jealousy out loud, and to dare myself to do things that scare me. I started writing letters to people I thought were better writers than me, I learned more about writing, and I made a lot of really good, supportive friends.

While there might be a little bit of gloating to be had now that I am in what many would consider to be a very enviable position – Published Writer – it’s not my friends I wanna brag to; it’s every asshole who called me ugly in junior high, the kids who threw garbage at me and followed me home threatening to kill me in high school, every shitty ex-boyfriend who thought my zines were stupid and pointless, the cops who told me to smile when they took my mugshot, the teachers who told me to stop dressing in black if I didn’t want to be bullied, everybody who thought dropping out of high school was a bad decision, the ex who told me he’d lost all respect for me when I applied for disability, the boys with guitars who’d invite me to all their shows but never give a shit about my own art, the nurses on the psych ward who told me I was isolating and writing too much and I should come out and watch TV with everyone else… There are a lot of people I want to brag to, and none of them are my friends.

If I had published a book five years ago, it would’ve been a really terrible book, and I would feel tremendously embarrassed to read it today. But back then, I knew that I needed to publish books, and I felt completely lost and incapable. I felt like I was running out of time and needed to create and publish something immediately. I didn’t think I would live to be twenty-seven; I had a deadline to get all these novels outta me!

Writing does not need to be, and should not be, competitive. I write for survival, revenge, and friendship; not to make my friends feel bad, not to make you feel unworthy, not to take anything away from you. There is not a finite amount of words to be written, zines to be photocopied, books to be published.

I’ve been hesitant to write about the other side of jealousy because, like I said, I’ve become a Published Writer, so what else is there to whine about, right? But I need you to know that, unless you can use your jealousy to create more positivity in your own life, it’s not useful to me; it only alienates me further when I already feel pretty fucking disconnected from friends, artists, writers, punks, weirdos, etc. Let’s talk more about the things that scare us.

This entry was posted in Uncategorized and tagged communication, friendship, i was a teenage goth, jealousy, ragdoll house, telegram anthology, writing. Bookmark the permalink.
Loading Comments...