Posted on February 1, 2013 by marandaelizabeth

When I talk about why I write, the words that come up the most are “survival” and “revenge” (I wrote all about it in my book); the third reason I write is just finally dawning on me: Friendship.

At each of my book launches, what I’ve want the most is to make connections. I want new friends, new pen pals, new discussions, even new crushes. I don’t want to be a Rock Star on a Stage Making You Listen to Me, and then Leaving. The reason I tell my stories isn’t because I think I have the Most Important Story to Tell, it’s because I want to encourage you to find ways to tell your own stories. Whether that be through writing, talking, drawing, journaling, painting, whatever. I want more stories from traditionally marginalized people, shy people, weirdos, queerdos, crazy people, depressed people, and misfits…

Here’s something I’ve been telling people lately, something I’ve been telling myself: Befriend the people who make you feel intimidated. Why? Because, cliché as it sounds, they are probably just like you. They are probably struggling with a lot of things and they probably want meaningful connections and magical friendships, too. I know I do. I’ve been told many times over the years by people both in my hometown, in my current town, and far away, that I seem “intimidating.” I used to take it as a compliment. I feel so small and useless, yet people are actually scared of me! Yay! And then I thought, hey, how the hell am I gonna make friends if people are scared to talk to me? Could feelings of intimidation be contributing to my feelings of loneliness? 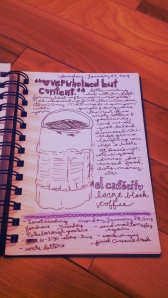 And it wasn’t just that folks were intimidated by me, it was that I felt intimidated by them, too. If I read someone as more attractive, more talented, more successful, more confident, more whatever, than me, I just plain assume that they have everything they want/need: they have enough friends, enough projects to work on, enough events to attend, enough things to do and people to see. They don’t have time for me. I’m not cool enough/ queer enough/ punk enough/ writerly enough for them. I leave them alone, or I say something awkward and then stumble away.

Total fail. We just lost an opportunity for a new friendship to blossom! Fuck that. We should’ve talked. We should’ve exchanged fliers for our zines and wrote sweet notes on them. At each of my book launches, I’ve talked a little bit about learning how to prioritize friendships, and wanting to make new friends; I’ve invited attendees to talk or to read their own stuff, ask questions; I’ve tried to make each event interactive in some way, so folks can participate rather than observe, and I’ve told everyone to write me letters. I do seriously want to hear from you; I’m not just saying it to be nice.

Of course, when I imagine myself as part of an audience at a book launch, I know that I would probably feel intimidated, too (and probably at least a little jealous – let’s be real). I’d probably forget to question my assumption that whoever is reading is a Busy Person with lots to do; they are too cool for me and they don’t have time for me. I hope that’s not how anybody feels when they hear me read, because it’s just not true. For me, it’s just me projecting my own insecurities onto somebody else. What about you?

Friendship. It seems so obvious. That’s why I started making zines, right?